Gluten Intolerance: Significant effects and symptoms to be considered 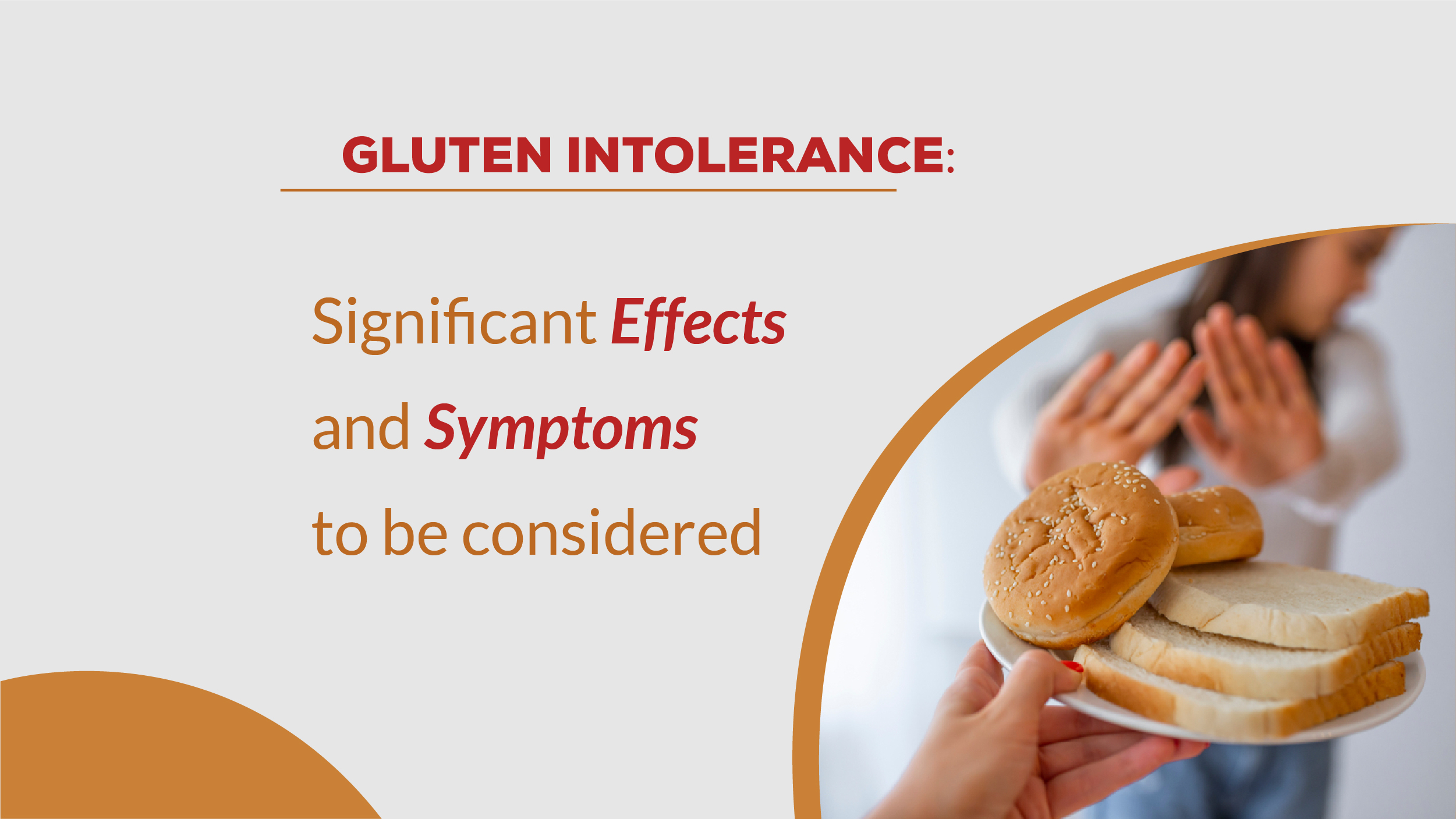 Gluten is a protein found in grains such as wheat, rye, and barley. If your body reacts to gluten, then it is considered gluten intolerant. This phenomenon is common, but it can sometimes have fatal consequences.

All three intolerances can present many different symptoms, some of which do not involve the digestive system.

Taking a deeper look, we can see more symptoms of gluten intolerance that are seen with the following three causes:

Symptoms that are found in celiac disease:

Celiac disease is a severe symptom of gluten intolerance. It is an autoimmune disease found in 1% of the population, which affects the villi in the digestive system if not detected.

Skin problems, digestive concerns, mood changes, and other symptoms are common to this disease.

The most common symptoms of celiac disease are:

Celiac disease individuals experience inflammation in the small intestine after eating gluten. The gut line is damaged and has poor nutrient absorption, resulting in significant digestive problems like bloating, diarrhea, and Constipation. The feces is pale and foul-smelling, leaving an agitating experience.

It also affects the skin. Skin problems like psoriasis, Alopecia areata, Chronic urticaria, and dermatitis are also seen in celiac disease as it is an autoimmune disease.

Our human body releases hormones that cause happiness reduction in chemicals like Atypical serotonin, Gluten exorphins, etc., which causes depression. Changes in the gut microbiota by increasing the harmful bacteria and decreasing the beneficial bacteria lead to depression.

In celiac disease, damage in the gut leads to less absorption of the nutrients, resulting in weight loss for these individuals.

Celiac disease is an autoimmune disease that causes your immune system to attack your gut health after consuming gluten.

Celiac disease promotes a genetically determined oversensitive nervous system leading to joint pains and numbness in the arms and legs.

It is a condition where you feel that the stomach is filled with gas or swollen. This makes you feel uncomfortable. Bloating is a common symptom sometimes, but it can be detected as a sign of gluten intolerance as well.

Occasionally this is a common condition in people. But when it happens often, then it is a cause of concern. These digestive issues are caused to people who are intolerant to gluten foods.

Though it is seen as natural and has many explanations. 83% of gluten intolerant people experience stomach pain after eating gluten food.

Gluten intolerant individuals are more prone to migraine episodes than others. Having headaches or migraines regularly without any apparent cause could be a sign of gluten sensitivity.

Tiredness is very common and usually not a sign of a medical condition. However, if you always feel tired, you should find out if there is an underlying cause. People with gluten intolerance are very prone to fatigue and exhaustion, especially after eating gluten-containing foods.

Anxiety is characterized by feelings of worry, nervousness, unease, and agitation. Often it occurs in conjunction with depression. 40% of individuals with self-reported gluten sensitivity stated that they regularly experienced anxiety. This implies exposure to gluten on its own may result in depression, irrespective of digestive symptoms.

It refers to the feeling of not being able to think clearly. It has been described as: being forgetful, having difficulty thinking, feeling “cloudy”, experiencing mental fatigue.

The symptom of “foggy mind” is a frequent symptom of gluten intolerance, affecting nearly 40% of gluten-intolerant individuals. The symptom may be caused by a reaction to specific antibodies in gluten, but the cause is unknown.

The symptoms of wheat allergy:

For people who suffer from immune problems, once they consume wheat, it triggers the immune system and reacts as an allergen. It gives rise to digestive issues such as nausea, vomiting, stomach cramps, diarrhea, bloating, pain, and indigestion.

Sneezing, nasal congestion, and running nose can also occur in a person with a wheat allergy. Individuals with Baker’s asthma commonly experience these symptoms. An allergy caused by frequent inhalation of bread flour, which results in increased sensitivity to wheat and other grains.

Anaphylaxis is a severe allergic reaction that could be fatal if untreated. It causes severe symptoms like swelling, hives, nausea, vomiting, and breathing difficulties.

After learning these symptoms, if you feel a diagnosis is required for you, then contact Dr. Remedies labs and visit the website for further information.

Can you suddenly develop gluten intolerance?

Celiac Disease Is Different from Gluten Intolerance: Celiac disease patients are genetically predisposed to gluten intolerance, and very small amounts can cause severe damage to the small intestine. A person can develop the disease at any age, which can cause serious health problems if left untreated.

What foods are high in gluten?

The foods that are high in gluten include bread, baked goods, pasta, cereal, crackers, beer, gravy, and soup.

What causes gluten intolerance to develop?

Unfortunately, gluten intolerance's exact cause is unknown. According to some studies, people may not be sensitive to gluten but to a carbohydrate in many foods. Carbohydrates are not properly absorbed by their bodies. Sickness results from it fermenting in their guts.

Can you self diagnose gluten intolerance?

To diagnose it subjectively, you must provide information about yourself. As part of the diagnosis process, blood and/or skin prick tests are often used to exclude wheat allergies and Celiac disease, as well as an upper endoscopy procedure if necessary (for Celiac disease only).

How do you test for gluten intolerance at home?

How long after eating gluten do symptoms start?

It can take two to three days for symptoms to appear after eating gluten. It is possible for someone with celiac disease to accidentally consume gluten without any apparent symptoms. Gluten, however, has the potential to damage the intestines even without causing any symptoms